What has caused the rise of diseases such as cancer, heart disease and infertility?

Over the past century there has been a massive change in the type of food that people eat.

Table 1 showing consumption of butter, lard, shortening, margarine and vegetable oils from 1909 to 1985 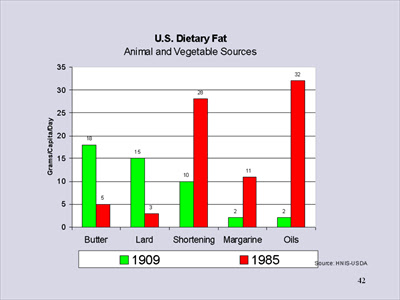 Table 1 shows that over the past century, butter consumption has plummeted from 18 grams per person per

day to 5. Consumption of lard has gone to very little while consumption of shortening has almost tripled. And the shortening in 1909 was made of coconut oil and lard. It was actually a natural product. Shortening today is made out of partially hydrogenated vegetable oil. Margarine consumption has gone up five fold

. Look at just the liquid vegetable oils –more than a fifteen-fold increase. These rancid vegetable oils are completely new to the human diet. These changes in fat-and-oil consumption patterns are the major cause of our modern diseases, including heart disease, cancer, infertility and learning disabilities in our children.
More information on this subject: Books

Recipe of the day

Instructions:
Heat 15ml/1tbsp tallow and 25g/1oz butter in a non-stick or griddle pan. Season 4 beef rump or sirloin steaks and fry the steaks over a medium heat according to preference.